Have you ever walked away from a conversation or staff meeting in your organization feeling somewhat uncomfortable, perhaps marginalized? You couldn’t put your finger on it. In fact, no one said anything offensive to you or criticized you in any way. But, somehow, you feel unmistakably devalued. There seemed to be a “message in there” somewhere. No doubt many of us have experienced this feeling at some point and found ourselves wondering if we were simply paranoid or seriously lacking competence in some indiscernible way. Certainly, if you were to mention that you felt uncomfortable because of the way the boss “looked” at you during the meeting, you very well may be subject to hallway ridicule.​ 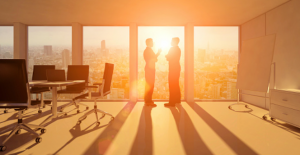 Welcome to microbehavior, a workplace phenomenon that has attracted the interest of many organizations seeking to improve employee engagement and performance. Microbehavior consists of micromessages, those small, semi-conscious messages we send and receive when we interact with others. They can be positive or negative. We send 40 – 80 micromessages in a 10 minute conversation or 2,000 – 4,000 verbal and non-verbal micromesssages in a day. They convey through facial expressions, tone of voice, hand gestures, choice of words, and eye contact. Since they are semi or unconscious behaviors, there tends to be a disconnect between their “intent” and their “impact.” No matter what you think you are saying, your tone, facial expressions and hand gestures can communicate something entirely different.

Some examples of positive micromessages include approving eye contact when speaking with you, acknowledging your idea…asking questions, soliciting your opinion during a meeting.

Negative micromessages include such things as overlooking you when introducing your work team, looking at her Blackberry while you’re talking, frequently confusing you with someone else of the same demographic, replying to your email only when the manager is copied, a blank stare when you’re speaking, acknowledging your idea after someone else restates it, and rolling of the eyes or sighing whenever you ask a question. Because they are small, micromessages are nearly invisible and certainly seem insignificant as individual events. As such, they make it nearly impossible for recipients of negative micromessages to address.

Mircobehavior becomes microinequities when it evolves into collective patterns of subtle, semi-conscious devaluing messages directed at you and not others. Through their surreptitious accumulation, microinequities discourage and impair performance which leads to damaged self-esteem and withdrawal. Much like the boiling frog fable, recipients of cumulative microinequities in organizations are boiled lifeless over time. As the fable goes, if you place a frog in a pot of boiling water, the frog will leap out. If, instead, you place the frog in a pot of temperate water and slowly increase the temperature to a boil over time, the frog will quietly succumb. Such is the powerful effect of microinequities on valuable organizational talent.

The term Microinequities first surfaced through the 1970’s and later groundbreaking work of Professor Mary P. Rowe of MIT. Through decades of studying workplace discrimination, Rowe finds that microinequities are the subterranean counterforces derailing diversity initiatives. That is, as we create policies and initiatives to encourage diversity and inclusion, people continue to use daily microinequities to wall out differences in small devaluing ways driven by social conditioning that says ‘different’ is inherently ‘less than.’ Despite our best intentions otherwise, microinequities tend to telegraph our true feelings about difference.

“I was sitting-in for a coworker in another department when one of our [internal] customers came in looking for the person he usually deals with. After looking around briefly, the individual looked directly at me and said, ‘I guess nobody’s here, huh?’”

On hearing this story, another session participant quickly asserted,

“If it had been me I would have said, ‘No’ [sarcastically agreeing that no one was there despite her own presence]. ‘Why don’t you leave and come back when somebody’s here.’”

The point of this story, of course, is that the minority woman was being defined as invisible or ‘less than’ through a microinequity. Her colleague is simply saying, since you devalue me as ‘less than,’ then I will act ‘less than’ and not offer any possible assistance.

While women and minorities historically receive disproportionate shares of workplace microinequities, all groups receive them and all aspects of work are affected. Being on the wrong side of the merger, style of dress, age, physical size, the people you choose to befriend, and even your attractiveness are common reasons for receiving devaluing microinequities.

Microbehavior on Engagement and Performance

Organizations are coming to better understand how microbehavior can have serious effects on employee engagement and performance, especially as related to leadership effectiveness. It is well documented that leaders affect engagement and performance in significant ways. “Almost all manager activities drive employee effort” according to the Corporate Leadership Council (2004). Leaders shape engagement and performance through the routine micro-signals they unwittingly send from their power positions. The approving eye contact when speaking with you, acknowledging your idea, asking questions about your proposal, soliciting your opinion during a meeting, all let you and others know that you are valued without the leader stating anything of the kind. You comfortably offer new ideas, take risks, and do whatever it takes to ensure organization success.

On the other hand, when the boss routinely acknowledges your idea after it is restated by someone else during her staff meetings, renders a blank stare as you give operational updates, rolls her eyes whenever you ask a question, and invariably cuts you off, it seems obvious that something is wrong with you. Constantly off-balance, you retrench while struggling to figure out your situation instead of leveraging your potential towards team success.

Contrarily, recipients of microinequities are defined as “C “players” and limited by the leader’s apparent expectations of them through the well researched Self-Fulfilling Prophecy affect. They are likely to receive few developmental assignments, lose confidence, and actually become what they are defined through the leader’s microinequities, which also influence others to treat them in subtle exclusionary ways. Alternatively, good talent that is subject to a culture of microinequities is likely to leave the organization. As always, the leader sets the tone.

Dan is the Director of marketing for a mid-size educational and training firm. During an evening social event following the firm’s annual leadership update meeting, Dan was enjoying cocktails with several members of his marketing team when the president of the firm walked up. “Hi Bob,” Dan says. “Hey, I’d like you to meet a couple of people on my team.” Turning to the person on his right, Dan says, “this is Andrew Beamer who is one of our Senior Marketing Representatives. Andrew is responsible for designing, producing and distributing our print and media promotions.” With beaming eye expression, and energetic tone, Dan elaborates. “You may recall that successful TV spot last fall promoting our new E-learning capabilities throughout the northeast region.” Patting him on the shoulder, Dan says, “Andrew here was the brains behind that home run.” Bob engaged Andrew around several questions before Dan turned to introduce Carla.

Gazing somewhat blankly past her, Dan says with neutral voice tone, “Carla Williams is our Market Researcher and has been on our team for… maybe… three years.” With his back now slightly toward Carla, Dan turns to Bob and says, “you know Bob, we faced tremendous challenges this quarter and our team overcame every one of them. It took a while for the E-leaning strategy to show promise but we can now see the light, thanks to our powerful media promotions. We expect it to become a top revenue performer by next year.”

Chances are that Dan is completely unaware of the difference in the way he introduced his team members. More importantly, he is unaware of its impact. It is undoubtedly clear to Andrew and Carla, however, that Dan valued Andrew and she was all but invisible. Dan’s enthusiasm and praise generated interest on the part of the president who likely perceives Andrew as an “A” player while Carla will remain anonymous even though she was indeed introduced. Carla could very well have been instrumental in targeting the successful market segment through her research, a fact that failed to see the light of day in the introduction. Carla is left to feel mystified and devalued despite her best efforts.

Chances are also are that Dan sends these micromessages on a regular basis in his interactions with his team members and Carla receives devaluing messages while Andrew receives valuing messages with regularity. Carla could probably actively contribute more to her team’s promotional efforts based on her research vantage point. However, she has little reason to go out of her way for the firm and will probably seek job opportunities elsewhere – quietly.

What to Do as Leaders

Microbehavior is a natural human characteristic. It is best approached in the workplace through leadership awareness and behavioral self-management that reshapes the organization’s communication culture. As a leader, make it O.K. to talk about microinequities in your organization or in your team. Create a climate of trust, where mistakes are forgiven.

Distraction of multitasking when interacting with others

Promote an Inclusive Climate with Micro-Affirmations